The 1930s ushered in the golden age of radio.  As cheaper and smaller radios were being produced, the radio became the central piece of furniture in the average family’s living room; the family huddled around the radio together entertained, informed, and united, if only virtually, by the first collectively-experienced mass medium.[1]  Some worried about the anesthetizing effects of the radio and the propriety and taste of the radio programming that penetrated America’s domestic safe-haven from popular culture.[2]  The radio brought the public sphere into the private realm, bringing the outside world into the most personal of spaces: the home.  A constant free stream of entertainment included live musical programs, drama, talk, and comedy acts.  The radio broadcast also has the power to dislocate the listener by transporting her or him to an imagined place, stimulated by the aural codes of the radio.

On December 12, 1937, American actress, singer, and comedian, Mae West, appeared as a celebrity guest on The Chase & Sandborn Hour, a Sunday evening variety show hosted by ventriloquist Edgar Bergen and his dummy, Charlie McCarthy.  This thirty-minute segment aroused the most public criticism radio had yet encountered.[3]  Her appearance was described as “profane,” “filthy,” obscene,” “horrible blasphemy,” and “vomitous”.[4]

West performed in two skits.  First she played Eve, seducing the serpent in the Garden of Eden to procure the fruit to give to Adam, played by Don Ameche.  This skit was criticized by religious and reformist groups, as well as many Americans who did not actively vie for censorship, for the emphasis it placed on a woman’s desire for carnal experiences in this appropriation of a biblical story.[5]  After a musical interlude, the second skit was set up as a battle of love between West and the dummy Charlie McCarthy.  West seduced McCarthy, a popular personality in 1930’s America, figured as a suave, but inexperienced adolescent.  This skit, particularly West’s role as seducer, broke social taboos about intergenerational intimacy.  The National Broadcasting Company (NBC), who produced the show, put all the blame of the scandal on West, banning the mention of her name and forbidding other comedians to refer to the outrageous incident.

But, the Federal Communications Commission (FCC) guaranteed that NBC could preview the script before the live performance.  This script was approved by the show’s producer’s at the final read-through, and West recited the same lines on the live broadcast.  The issue lies in the specific voice of Mae West, her intonations, and sultry air.  Mae West was a big star, and her exaggerated screen and stage persona as a “tough girl” with a questionable ethical history positioned her as an icon of sexual deviance.[6]  Viewers clearly embodied West’s signature husky voice with her notorious image.

The Mae West scandal brought the issue of the dual meaning of words to the forefront of the debate on permissible limits on radio broadcasting.  Since the scripts that were said on the radio needed to be pre-approved by the show’s producers, each word was carefully scrutinized.  Verbal punning was the primary source of antagonism for reformers and religious groups, as the popular “verbal slapstick” comedic style allowed for a single word to have dual meanings.  This was a way for comedians to get around the FCC’s strict standard of moral, sexual, and religious purity and still be funny. Puns made the radio safe for children, and funny for their parents, as certain jokes would wash over a child’s head with no harm done.  Those who defended West argued that her material was no worse than that of popular male comedians, such as Fred Allen and George Jessel.[7] West is not only punning, but acting, changing the words with her vocal inflection. West always delivered her lines in a way that could not be separated from her vocal style and unique presence, arguably the sign of a talented comedian. She drew her audiences in with an overtly sexual self-presentation, whether they were seeing her or listening to her.

In the West-McCarthy skit, West propositions the ventriloquist doll, “Come on home with me honey.  I’ll let you play in my woodpile.”  These words were signed off on by the network, all in accordance with FCC regulation.  But when they came out of Mae West’s mouth, they caused an uproar.  After the radio broadcast, West’s intonations became the focus of complaint, her added “mm’s” and strategic pauses and emphases supposedly dirtied the previously approved words.  The moral argument was that the secondary meaning of her innuendoes were completely explicit, that the duality was usurped by West’s blaring signal of carnal lust and desire.

The scandal that ensued seemed to be particularly sensitive because the sexual under/over-tones of West’s voice invaded public and personal, domestic space.  One editorial noted:

"The home is our last bulwark against the modern over-emphasis on sensuality, and we cannot see why Miss West and others of her ilk should be permitted to pollute its precincts with shady stories, foul obscenity, smutty suggestiveness, and horrible blasphemy."[8]

It is this infiltration of the immorality of Hollywood into the domestic sphere--the sphere of the heteronormative, middle-class family--that was especially threatening.  West was too explicit, causing dormant sexual desires and impure thoughts of listeners to surface.  The method of delivery can make seemingly innocent words into impure blasphemies: a husky voice can indicate lust in the same way that Bergen made his voice nasally and higher to speak through his dummy, McCarthy.  On the radio, we hear only these voices, as they need to be exaggerated to color the stories being told.  Without visuals, the voices indicate the bodies they come from, and the imagined movements those bodies would be making.  This is where the “danger” lies, in the imagination of the listener.  The voice is something that can slip past the FCC (and the individual broadcast companies), and burst onto the airwaves with a sexual tone powerful enough to cause a national uproar.  This moment publicized the moral and institutional tensions concerning censorship in the 1930s.

[1] At the start of the decade 12 million American households owned a radio, and by 1939 this total had exploded to more than 28 million. (“Radio in the 1930s”, History Detectives, PBS, http://www.pbs.org/opb/historydetectives/feature/radio-in-the-1930s/)

[2] In 1932, journalist Anne O’Hare McCormick wrote a series of reports for the New York Times analyzing radio as a “great unknown force.”  She observed that radio listening was a passive, vicarious experience with a “dazing, almost anesthetic effect upon the mind.” (Smith, Stpehen, “Radio: The Internet of the 30’s”, American Radio Works, Nov. 10, 2014. http://www.americanradioworks.org/segments/radio-the-internet-of-the-1930s/)

[5] This same skit was performed by an all black cast only three months earlier with no controversy, as black men and women were already positioned as over-sexualized.  West’s cinematic notoriety and race allowed the issues surrounding this piece to be magnified.  The previous program lacked the pre-publicity and public notoriety of the West-Ameche-McCarthy effort, as well as West’s suggestive vocal inflections, central to the Chase & Sanborn Hour controversy (Evans Plummer, "Hollywood Showdown," Radio Guide Jan. 15, 1938: 12). My estimation that black performers were deemed "naturally" oversexualized is based upon an interpretation of dominant racist discourses of the time and not empirical evidence, as especially discussed by Murray in relation to this scandal.

[7] A telephone survey of randomly selected members of the public undertaken by the fan magazine Radio Guide produced the following results: fifty-nine per cent of interviewees who had heard the December 12 episode approved of West's performance, while sixty percent responded that they would like to hear more sophisticated programming over the radio than currently existed. (Evans Plummer, "Hollywood Showdown," Radio Guide March 5, 1938: 10; see also Louis E. Bisch, M.D., "Does Radio Need Sex Appeal?" Radioland Dec. 1933: 13.) 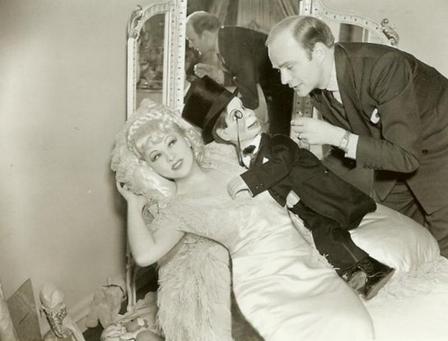