The Tournesol Award recognizes one Bay Area-based painter each year with a generous cash prize and a year long studio residency. Elizabeth Bowler’s self-illuminated, sculptural paintings depict transient topographies of light and livingness. The Luggage Store hosts Bowler’s solo exhibition, Terraform, which culminates her 2015–16 Tournesol Award residency, and runs through August 6. Bowler will give an artist talk at The Luggage Store on Wednesday, July 20 at 6PM. 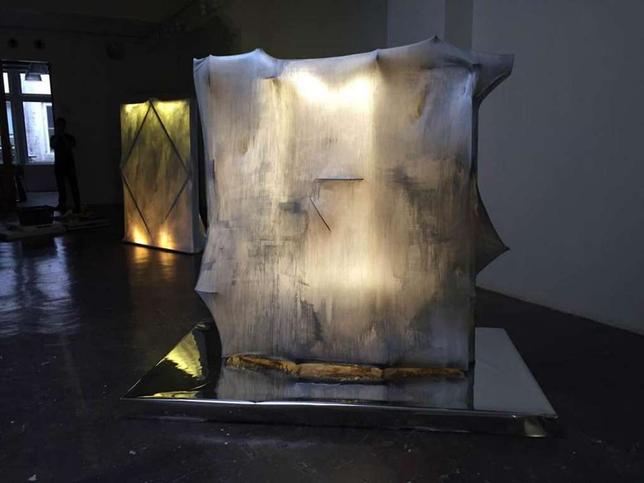 Elizabeth Bowler was born in 1991 in Kent, England. She received a BFA at Nottingham Trent University. In 2013, she moved to California to pursue an MFA at the San Francisco Art Institute. She has been featured in several group and solo exhibitions in the US and UK, including Vulnerability vs. Strength at Linus Gallery in Los Angeles, the Bay Area Abstract Show at Poplar Gallery and the National Juried Exhibition at the Marin Museum of Contemporary Art. Additionally, Bowler has been recently exhibited at Gallery Route One in Point Reyes, Westbeth Gallery in New York, the Orange County Center for Contemporary Art, and the Diego Rivera and Swell Galleries in San Francisco. In 2015, Bowler received the Headlands Center for the Arts Tournesol Award and year-long studio residency.

Elizabeth Bowler’s paintings function like skin over bone, as they push and pull toward and away from the viewer. The sculptural paintings alter the structure of traditional stretcher bars, creating a multitude of geometries. The traditionally rectangular frames push outward, downward, and sideways through contending spaces of expansion and retraction. These actions are informed by sacred–or canonized–geometry, working to produce haptic sensations in the viewing experience.  By operating in the context of phenomenology, wherein one subjectivity is intentionally directed toward another, the work elicits bodily reactions.

Bowler creates a mixture of pigment and oil medium to formulate her paint materials. In so doing, she calls on the history of painting. Furthermore, the paintings employ rabbit skin glue, a strong adhesive once used to seal King Tutankhamen’s casket. The glue tightly binds the muslin surfaces to their supports. By nature, muslin is tighter and more fragile than canvas, allowing for the creation of dramatic shadows, bends, and contortions.

Light is the oeuvre’s informant and stage. She has been following the sun’s cycle, marking the ever-changing natural light with a palette of grays, browns, and whites. As the sunlight changes, her works are activated differently, as layers of drips, marks, and strokes of paint are illuminated to reveal the painting’s history. Even as the sun sets, these works stay awake to present a more solid surface that seems to have fused with its muslin base . Though all works are informed by a study of natural light, Bowler also investigates artificial light by enshrouding it within the painting’s structure. The artificial light not only illuminates the paintings’ interiors, but also positions them in conversation with the exterior, natural light and other works.

The works invoke corporeality in their scale, eerily relating to the size of the human body. The canvases’ protrusions and recessions complicate the irregular forms, as Bowler plays with both the surface and structure of painting. Looking at the concave puckers, which tightly pull toward the painting’s mysterious centers, compels one to take a sharp breath inward. These stabbing and jutting protrusions violently enter the viewer’s space–discreet bodies which are held in constant tensions of expulsion and retreat, attack and surrender. Their canvases propose imperfect skin – bruised, scarred, and puckered – as they settle on their voluminous structures. Bowler’s works are vessels with vacancy for a consciousness, or, dare I say, a soul.