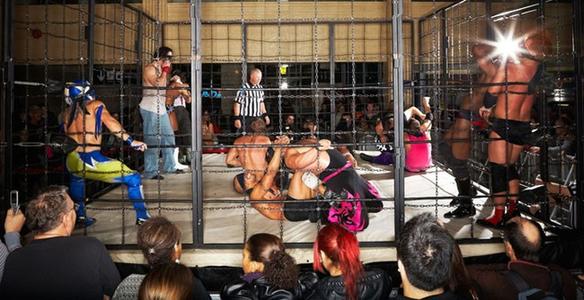 Shaun Leonardo fights bulls, wrestles with professionals and defends football tackles. His artistic practice explores the cultural construct of machismo, as he slows down and manipulates the rituals defining sport and gender. Through performance, video, painting and drawing, Leonardo’s body remains the center, subject and focus of his extremely physical and violent work. In Battle Royale, Leonardo enters into a blindfolded wrestling match, fighting three professionals in a caged ring at once. The men fight until they cannot go on; the last blind man standing wins. He pushes the body to its limits, incapacitating a real and performed violent masculinity. After this performance and many others like it, Leonardo needed to spend days recovering in a hotel room.

As his body is physically deteriorating, Leonardo removes it from the spotlight in his recent work. He shifts his focus to champions and their symbols. The quiet moments of a champion’s vulnerability are a means to destabilize cultural constructions of greatness.

I commissioned Leonardo to spend the night in a hotel room, record his voice, and leave it behind. I had not yet met Shaun, only communicating via email and phone the day before. Leonardo arrived in San Francisco at 3 A.M. on Friday, March 6th. Exhausted from a long journey filled with delays, he is greeted at the Reception Desk of the Hotel Rex with a recording device and this prompt:

In a hotel, one is displaced from culture, though a hotel tries to create a semblance of culture. What happens to the body when it is in the environment of the hotel room? Does your body feel dislocated in the anonymous hotel room? I ask you to disembody yourself, leaving only your voice behind in the non-specific place of the hotel. What voices speak to you in a hotel room?[1] How does your voice move in this space? What does a night alone in a hotel allow you to do? Have you escaped or are you trapped in a box, within a box, within a box?

I have left Wayne Koestenbaum’s Hotel Theory.[2] Use it for inspiration as you like.

This prompt is very open. Please feel free to take it where you like. As the project continues, we will archive the voices of the artists that spend a night in a hotel room. We are working with SFAI’s Tower Radio as a permanent home for these voices. We will also develop a program and play them in an enclosed listening station in the Diego Rivera Gallery during the week of April 19th.

Minimum amount of recorded time is twenty minutes (but there is no maximum time limit). The project is more about you talking, though a narrative is not necessary.

Please record your voice on the Zoom Recorder we have left for you.

Pull the hold switch down, so that the screen lights up. Press the red dot to record. Press it again to pause the recording. You can adjust the microphone volume on the right side. Pull the hold switch down again to turn the device off. There are more detailed instructions in the box if necessary. If you are not able to operate the recorder, a voice note on your cell phone will suffice.

I can collect the book and the recorder from you tomorrow when we meet, so please do bring them with you when you check out tomorrow (before 12 pm). You are welcome to have breakfast and charge it to your room, since you were not able to have dinner last night.

Thank you for participating. I look forward to meeting you tomorrow. Please do not hesitate to call or email me with any issues that come up. I will try to stay up to respond, but everything should run smoothly.


I hope you enjoy your stay,


Leonardo reads most of Koestenbaum’s book, meditating on how his body feels in the hotel room. The hotel room brings up memories of other nights spent in hotel rooms: nights of pain and love. As a siren passes, his sleep-deprived message to unknown receiver jumps between observations and recalls personal memories. He conducts a séance with his past and present. The body is referenced, but he moves away from physicality; all we hear is his voice.


[1] Recalling the Victorian séance here, I am referring to the occult practice of calling of the voices of the dead to speak to the living. A particular environment is necessary for this kind of communication. A hotel room that strangers have temporarily inhabited before may be this kind of space. Leonardo could communicate with the passed experiences of those who occupied the same, intimate space.

[2] Hotel Theory is a meditation on the meaning of hotels combined with nonfiction ruminations on hotels. The theoretical texts and personal accounts appear concurrently in separate columns on the same page. Accounts of Oscar Wilde and Marilyn Monroe converse with a theoretical investigation of hotel rooms as blank slates, prison cells, and spaces for ghostly encounters.